About
Made in the U.S.A. Infinity Fabrics is the green way to accommodate your boating needs. Made with 100% recyclable materials, this flooring is U.V. resistant and has antimicrobial technology which prevents bacterial growth.  This flooring is pet friendly, and is unaffected by sea gull and spider deification! It also is unaffected by gasoline, motor oil, and grease. 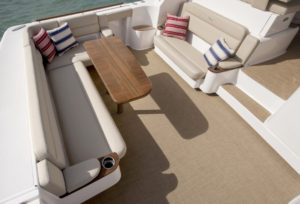 Backing
Most flooring or carpeting use urethane backing. If you have this kind of flooring you will notice that once your flooring gets wet, it stays wet for a long period of time which will encourage mold and mildew growth among the fibers. Urethane backing on flooring also discolors, cracks and is shreds leaving a mess all over your boat. Infinity Fabrics uses vinyl backing. Since the front of the flooring is also vinyl this means that both the front side and back side of Infinity Luxury Woven Vinyl is recyclable. The vinyl is anti-microbial and anti-bacterial, so mold and mildew cannot grow here! Infinity Luxury Woven Vinyl dries quickly and can never get soaked by any liquid. According to Infinity fabrics, if their flooring is submerged in water, it will actually float, not sink like typical carpeting. 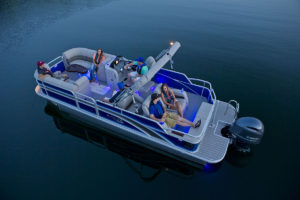 Care & Cleaning
The best way to keep Infinity Luxury Woven Vinyl looking spiffy is by hosing it down on a weekly basis with clean water. This helps prevent dirt build up from becoming stuck in between the complex weave structures that make your flooring look great!
General/Light Cleaning
-Brush off loose dirt on you flooring with a broom.
-Hose down with clean water
-Mix a solution of clean water and mild soap (such as dishwashing liquid or a house hold cleaner), apply a small amount to Infinity Luxury Woven Vinyl 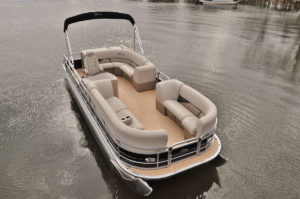 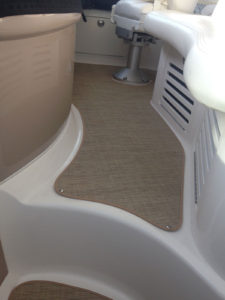 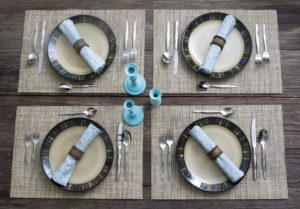 Extra Flooring
Ask about your extra flooring scraps! It can be made into floor mats, door mats, place matts, swim platform matts, even a matt for your dock!
Warranty
Infinity Luxury Woven Vinyl has a ten year limited warranty!!!

Interested in getting rid of your moldy carpeting forever?! Check out Infinity Luxury Woven Vinyls different weave patterns and then give us a call! 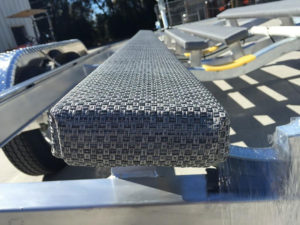 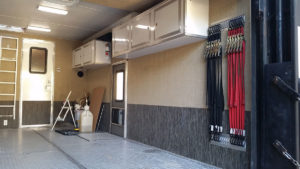 For more information visit their website or read their product guide.

Chicago Harbors 2016 Weekend Schedule, your #1 guide for all the top events and activities for boating in Chicago this summer.

Our Chicago Boat Storage Guide is the authority when it comes to great marinas and boatyards for winter storage for your yacht or boat.   It is arranged by geographical area around Chicago with pros and cons.   If you’ve had a great experience or difficult one at a storage facility listed or would like one added please submit a comment and we’ll get it on the list.

Storing your boat in the Chicago River system is a convenient option when keeping your at the various Chicago Harbors during the summer months. This can be a huge benefit when facing inclement weather in October since you don’t have to travel far in potentially rough seas. You do pay a premium for this convenience but it does allow you to get the most out of your boating season making these a favorite of the Chicago Boat Storage Guide.

Depending on your harbor, the Calumet River is located about 20 miles south of Chicago by water.   As long as the weather is co-operating it’s a nice cruise at the beginning of the season as you take in the Chicago skyline.  NE winds in the fall will help push you down but you don’t want to have too much help as winds over 15 knots can make it an uncomfortable ride.   Traveling on the river is enjoyable but be conscious of the barge traffic which services some of the industry located on the river.  Rates are less than what you’ll find on the Chicago River but it seems to equal out when you consider the gas burned to/from along with travel distances to the area.

There are plenty of great storage areas across Indiana and Michigan but here are a few that we’ve had experience along with other boaters in our network.   There maybe some cost savings when storing in these areas but the travel expense and time negates the savings.   If you purchases your boat from a marina or boat dealer in Indiana or Michigan, that’s a great reason to return to them.   These businesses like to cater to and keep their customers offering great deals on winter storage but also service.

Winter Storage in Chicago doesn’t get any easier than just staying at the harbor!  There is some downside with storing at the harbor such as they’re not a full service marina but Skipper Bud’s does service each harbor.   Both locations offer some discounts in conjunction with summer slip fees too.

If you have a trailer for your boat and can haul out yourself the options are really limitless.   From your neighbor’s driveway, barns to your local public storage units you can pretty much store anywhere.  You’ll just want to confirm that area is secure and a safe environment for your boat. 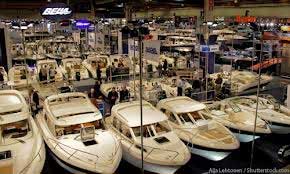 There are many great Chicago and South Lake Michigan Harbors that boaters visit every summer!  Here’s a list along with some great information on each starting from the northwest. 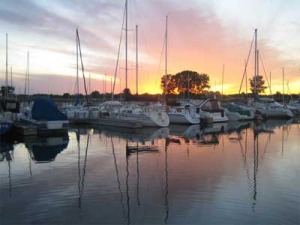 Northpoint Marina : The largest marina on Lake Michigan is home to over 1500 slips with some of the nicest facilities available.  With transient slips available, this is a great place to stop off when cruising between Milwaukee and Chicago.

Waukegan Harbor : Just south of Northpoint Marina, Waukegan Harbor has some of the nicest amenities you’ll find.   It also has excellent salmon and lake trout fishing right outside the harbor.

Wilmette Harbor : Wilmette Harbor is a very small harbor that caters primary to small sailboats.   The main attraction though is the architecturally stunning Baha’i Temple which is a hidden gem for boaters just south of the harbor.   Sporting one of the few areas with sand bars on the western shores of Lake Michigan, this area is anchor down at when light SW winds are blowing.

Montrose Harbor : Montrose Harbor is the most northern harbor in the 10 Chicago public harbors.   Fishing from shore around the harbor is excellent and it also has a great bait shop too!

Belmont Harbor : Belmont Harbor is one of the largest harbors in Chicago providing slips to both sail and power boats.   The fuel dock facilities can accommodate vessels up to 120′. 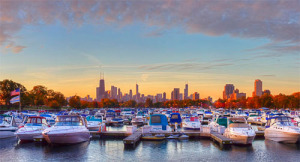 Diversey Harbor : This harbor is home to power boats only due to the bridge clearance of ~ 14′ at the mouth of the harbor.  It’s one of the most vibrant harbors in Chicago and also has 2 launch ramps for daily boaters.   Being steps away from Lincoln Park and Lincoln Park Zoo, this is a great place to lay up for the night.   This could be the wildest Chicago and South Lake Michigan Harbors.

DuSable Harbor : DuSable Harbor sits on the northern point of Monroe Harbor which is where you would enter by sea.   It’s the closest harbor to Navy Pier which always provides a great day of entertainment.

Monroe Harbor : The harbor of cans….. Not those cans but the cans you will have to moor your boat too!  There are no slips at this harbor but the cans are a very affordable way to start boating in Chicago with some of the lowest rates for slips.   Monroe also has a great “touch and go” for picking up and dropping off guests. 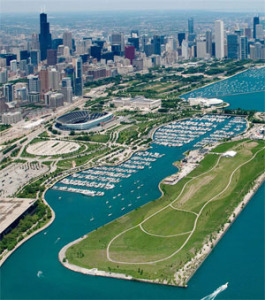 Burnham Harbor : Home of some of the largest yachts in Chicago and also the Chicago Bears, this harbor has something for everyone.   Burnham Harbor is located with in walking distance of Chicago’s museum campus and Northerly Island which hosts outdoor summer concerts just about every week.    Getting a transient slip on the east side of the harbor is the way to go to enjoy your favorite bank on the night of the concert.

31st Street Harbor : The newest harbor in Chicago, 31st offers some of the best amenities available to boaters.  It also has a  very wide and accessible set of launch ramps and hosts some great events over the summer.   The Chicago In-Water Boat Show is one of a kind where you can pull up and dock your boat while browsing the newest boats available.   There are also plenty of summertime concerts at 31st too.

59th St Harbor : This harbor is one of the smaller harbor in Chicago but one of the most beautiful.  It’s a short walk to the Museum of Science and Industry and also the 63rd St Beach.   There’s also a public golf course nearby too.

Hammond Marina : Not only is Hammond Marina great to tie up at for a trip to the Horseshoe Casino but also hosts one of the best festivals of the year, Festival of the Lakes.

Michigan City Port : This harbor has gone through some great renovations over the past 10 years.  There’s a great beach right next to harbor and home to some of the most majestic sand dunes in Indiana. 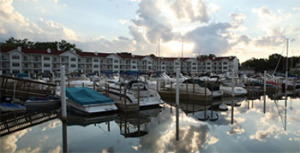 New Buffalo Harbor : New Buffalo is one of the closest and best destination when traveling from Chicago by sea.   The Stray Dog Bar & Grill is a must see when your in town but there are plenty of good restaurants and bars within walking distance to the harbor.   Transient slips are available at a great rate and it’s the perfect place for a quick overnight stay.

St Joseph & Benton Harbor : These two cities have developed into one of the most popular stopovers in the lake which lie at the mouth of a major river.  West Basin Marina is a good place to stay since it’s the only marina with connection to the beachfront.   This is definetly a port where you’ll want to spend a few night traveling around the river and also to see what both towns have to offer.

South Haven : South Haven is by far the premier cruising destination with multiple marinas available to dock at up and down the winding river which makes it so popular.   It’s very easy to walk through this historic and beautiful town with it being another port that you’ll want to stay more than a day at.  Another great resource for South Haven is the South Haven Visitors Bureau. 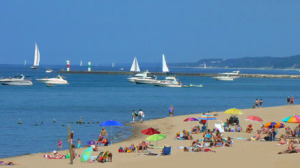 Saugatuck : Sometimes called the Cape Cod of the midwest, Saugatuck is a beehive of social activity.   When you enter the channel into the Kalamazoo river there’s a great anchorage right inside to starboard which gets very crowded on the weekends.  As you get into Kalamazoo Lake they’ll be plenty of slips on northside servicing the downtown area.  This is one of the best Chicago and South Lake Michigan Harbors.

Holland : A pleasant town of tulips and Dutch charm on inviting Lake Macatawa, Holland’s beauty is unmatched.   You won’t find the hustle bustle of Saugatuck in Holland but it’s a great place to explore and unwind.   When entering this port you won’t miss the now silent foghorn of Big Red on the south pier.